Josh Gad is an American actor, comedian, and singer. His film roles include The Rocker, The Internship, 21, Love & Other Drugs, Jobs, Pixels, The Wedding Ringer, A Dog's Purpose and sequel A Dog's Journey, Marshall, and Agatha Christie's Murder on the Orient Express. He is also known for voicing Olaf in the Frozen franchise.

He voices Chuck in The Angry Birds Movie and its sequel. 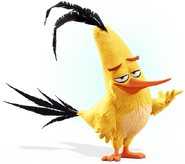 Chuck
(The Angry Birds Movie 2)
Add a photo to this gallery
Retrieved from "https://sonypicturesanimation.fandom.com/wiki/Josh_Gad?oldid=24856"
Community content is available under CC-BY-SA unless otherwise noted.