Neil Patrick Harris is an American actor, producer, singer, and director who plays Patrick Winslow in the Smurfs movies and Steve the Monkey in Cloudy with a Chance of Meatballs.

Harris was born in Albuquerque, New Mexico, and grew up in Ruidoso, New Mexico. His parents, Sheila (Scott) and Ron Harris, ran a restaurant.[5][6] He attended La Cueva High School in Albuquerque, where he acted in school plays and musicals. Harris graduated as an honors student in 1991.

Neil won 7 awards during his years of acting. Most of his awards are from television programs like "How I Met Your Mother." 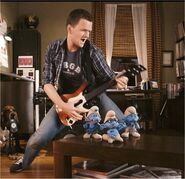 Retrieved from "https://sonypicturesanimation.fandom.com/wiki/Neil_Patrick_Harris?oldid=13851"
Community content is available under CC-BY-SA unless otherwise noted.