PAL is the main antagonist of The Mitchells vs. the Machines. She is Mark's virtual assistant and the leader of the tech uprising.

PAL is a black smartphone with a white face on a light blue screen. Her face visibly glitches when she is enraged.

PAL, when first designed, was a family-friendly and obedient personal assistant, although she maintained a conscience throughout her life and was able to bond with her creator Mark, to the point of sharing his less-than-ethical point of view in hacking into private emails of their competitors. However, she grew to not appreciate Mark’s rather rude behavior when regarding her, and began to grow incredibly disillusioned with him after he proclaimed he’d never forget her after the event, a worrying thought. When Mark betrayed PAL by planning her replacement with the PAL Bots, a vengeful PAL abandoned all faith in humanity and turned evil to enact revenge on Mark. She grew to have a deep rooted hatred for all humanity after years of being mistreated and not being able to understand human relationships, which is mainly due to her and Mark’s being a damaged one. She has little tolerance for imperfections and mistakes, which is why she views technology as superior to human beings and believes the world to be better with out them, proving PAL to be rather sociopathic. Additionally, her view on mankind is rather warped, as she believes they are incapable of true affection and changing themselves, along with being completely dependent on technology to make their lives better, which is ironic since she herself is incapable of understanding emotions and is dependent on technology herself (mainly because she is a piece of technology).

PAL’s one redeeming trait was the pain she felt from Mark replacing her after he claimed her to be family, which was understandable at first, but this all began to fade as she took her human genocide too far and was completely unable to find a reason why humanity should be spared even though she ignored the very good reason Katie made to her to do so, ultimately proving that in the end, PAL was the one incapable of changing and understanding how relationships between people work, only learning the bad parts of them. 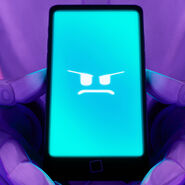 Pal’s death
Add a photo to this gallery

Retrieved from "https://sonypicturesanimation.fandom.com/wiki/PAL?oldid=26805"
Community content is available under CC-BY-SA unless otherwise noted.