The Pirates! Band of Misfits

Hotel Transylvania (2012)
The Pirates! Band of Misfits (The Pirates! In an Adventure with Scientists in the UK) is a 2012 British-American Academy Award-nominated 3-D stop-motion animated film produced by Aardman Animations and Sony Pictures Animation. Peter Lord directed, and among the featured voices are those of Hugh Grant, Salma Hayek, Jeremy Piven, Imelda Staunton, and David Tennant.

In 1837, the Pirate Captain, inexpert in the ways of pirates, leads a close-knit, rag-tag group of amateur pirates who are trying to make a name for themselves on the high seas. To prove himself and his crew, the Pirate Captain enters the Pirate of the Year competition, with the winner being whoever can plunder the most. After several failed attempts to plunder mundane ships, they come across the Beagle and capture its passenger Charles Darwin. Darwin recognises the crew's pet Polly as the last living dodo, and recommends they enter it in the Scientist of the Year competition at the Royal Society of London for a valuable prize. Secretly, Darwin plans on stealing Polly himself with the help of his trained chimpanzee, Mr. Bobo, as to impress Queen Victoria whom he has a crush on; the Pirate with a Scarf becomes suspicious of Darwin's motive after one failed attempt to steal Polly.

The pirates disguise themselves as scientists to enter the competition, and the dodo display wins the top prize, which turns out to be minuscule trinkets and a meeting with the Queen. The Pirate Captain hides Polly before the meeting. There, the Queen requests that the Pirate Captain donate Polly for her petting zoo. The Pirate Captain refuses and accidentally reveals his true self, but Darwin steps in to spare the Captain's life, secretly telling the Queen that only the Captain knows where Polly is kept. The Queen lets the Pirate Captain go and orders Darwin to find Polly by any means necessary. Darwin takes the Pirate Captain to a tavern and coaxes out of him that Polly is stashed in his beard. Darwin and Mr. Bobo are able to steal the bird, leading on a chase into the Tower of London where the Queen is waiting. She dismisses Darwin, and instead offers the Pirate Captain a large sum of money in exchange for Polly, which for the Pirate Captain would be enough to assure his win as Pirate of the Year. He accepts the offer and returns to his crew, assuring them Polly is still safe in his beard, though the Pirate with a Scarf is suspicious of his newfound wealth.

At the Pirate of the Year ceremony, the Pirate Captain wins the grand prize from the Pirate King, but rival pirate Black Bellamy makes the Queen's pardon known to all and explains that if the Pirate Captain has been pardoned, then technically, he is no longer a pirate and, as such, can't be Pirate of the Year. The Captain is stripped of the prize, treasure, pirate attire, and his pirating license and is banished from Blood Island by the Pirate King, and admits his loss of Polly to his crew who abandon him. The Captain returns to London, intent on rescuing Polly. He reunites with Darwin, learning that the Queen is a member of an exclusive dining society of world leaders that feast on endangered creatures, and that Polly is likely on her flagship, the QV1 to be served at the next meal. The Pirate Captain and Darwin work together to steal an airship to travel to the QV1. Mr. Bobo, meanwhile, goes to find the rest of the Captain's crew to enlist their help.

Aboard the QV1, the Queen locates the Pirate Captain and Darwin and attempts to kill both of them, but together they best her. In the battle, they accidentally mix the ship's store of baking soda with vinegar, causing a violent reaction that rends the ship in two. The Pirate Captain rescues Polly and they escape safely, leaving behind a furious Queen. With his reputation among pirates restored because of the large bounty now on his head, the Pirate Captain is reinstated as a Pirate, and he and his crew continue to explore the high seas in search of adventure.

In a few post-credits scenes, they leave Darwin on the Galapagos Islands, Mr. Bobo joins the Pirate Captain's crew, the Queen is left at the mercy of some of the rare animals she had planned on eating, Black Bellamy is forcefully stripped of his trophy by the Pirate King because of the Pirate Captain's new infamy, and the crew present the Pirate Captain with their own homemade Pirate of the Year trophy. 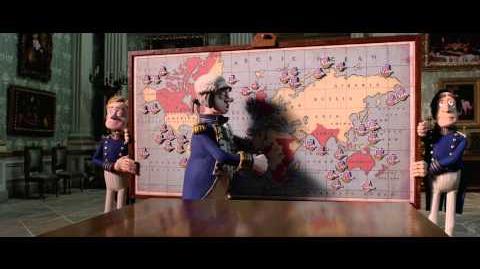 Even though it's a stop-motion movie, computer graphics have been used extensively to complement and enrich the movie's visual elements such as seawater and scenery. Peter Lord commented, "With Pirates!, I must say that the new technology has made Pirates! really liberating to make, easy to make because the fact that you can shoot a lot of green screen stuff, the fact that you can easily extend the sets with CG, the fact that you can put the sea in there and a beautiful wooden boat that, frankly, would never sail in a million years, you can take that and put it into a beautiful CG scene and believe it."[2]

A particular trailer of The Pirates! Band of Misfits attracted some very negative reactions from the leprosy community due to its portrayal of leprosy-stricken seafarers. The trailer in question - released in December 2011 shows The Pirate Captain landing on a ship and demanding gold. He is then told by a crew member, "Afraid we don't have any gold old man, this is a leper boat. See," and then his arm is shown to fall off.[3] Lepra Health in Action and officials from the World Health Organization, expressed that the joke depicts the illness in a derogatory manner, and "reinforces the misconceptions which leads to stigma and discrimination that prevents people from coming forward for treatment." An apology was demanded along with the removal of the offending scene.[4] Aardman apologetically responded: "After reviewing the matter, we decided to change the scene out of respect and sensitivity for those who suffer from leprosy. The last thing anyone intended was to offend anyone...". L.H.A. responded that it was "genuinely delighted that Aardman has decided to amend the film." The trailer was expected to be pulled down from websites[5], and in the theatrical version of the film, the word "leper" was replaced with "plague."

On August 14, 2011, Peter Lord tweeted on Twitter that an idea for a sequel to The Pirates! Band of Misfits is already in the works.[6] However, on January 13, 2013, he responded to a question on Twitter that the sequel was no longer going to happen, at least "not in the forseeable future".[7]

The Pirates! Band of Misfits is rated PG by the Motion Picture Association of America for mild action, rude humor, and some mild language, making it the third Aardman Animations movie to use this rating and is the first stop-motion film from Aardman to receive this rating. In the UK it has been rated U by the BBFC for very mild language, violence, threat and innuendo.[8]

On January 10, 2013, The Pirates! Band of Misfits received a nomination for Best Animated Feature from the Academy of Motion Picture Arts and Sciences. It lost to Pixar's Brave.

Sony Pictures Animation Wiki has a collection of images and media related to The Pirates! Band of Misfits.

Retrieved from "https://sonypicturesanimation.fandom.com/wiki/The_Pirates!_Band_of_Misfits?oldid=26866"
Community content is available under CC-BY-SA unless otherwise noted.