This article is a stub. You can help Sony Pictures Animation Wiki by expanding it.

the 6th Power-generating Pokemons Movie is a upcoming All-CG animated superhero movie produced by Sony Pictures Animation and featuring only 3 Pokemons as Crime-fighters/Superheroes - Froakie, Chespin and Fennekin (from "Pokemon X and Y")

this is not set in Pokemon universe and Others, it was set in normal universe

Satoshi Tajiri (voiced by Mark Hamill) have created 3 Pokemons through his experiment - Froakie, Chespin and Fennekin were becoming Crime-fighters and Heroes, they face to stop and confront a New Zealand Supervillain (voiced by John Goodman) who unleashed giant food storm over world to rain Giant Foods. 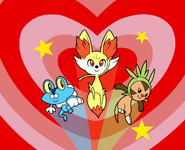 Promo for this Movie 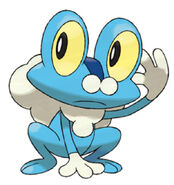