English
Vivo is an upcoming 2021 American computer-animated adventure musical comedy film produced by Sony Pictures Animation and Columbia Pictures and animated by Sony Pictures Imageworks. The film was directed by Kirk DeMicco, co-directed by Brandon Jeffords, from a screenplay by Quiara Alegria Hudes and a story by Peter Barsocchini, with songs written by Lin Manuel Miranda. The movie is scheduled to be theatrically released in the United States on June 4, 2021.

From Sony Pictures Animation, the studio that brought you Spider-Man™: Into the Spider-Verse, comes Vivo, an animated musical adventure comedy featuring all-new original songs from Lin-Manuel Miranda, the creator of the Broadway smash “Hamilton,” whose flair for mashing up musical styles will give the film a wholly unique and contemporary sound. This incredible story about music and friendship will take audiences on an epic adventure to gorgeous and vibrant locations never before seen in animation and focuses on a musically-inclined capuchin monkey who, with a thirst for adventure and a passion for music, makes a treacherous journey from Havana, Cuba to Miami, Florida in pursuit of his dreams to fulfill his destiny.

In December 2016, Sony Pictures Animation acquired the project from DreamWorks and fast-tracked it under the name Vivo, which was based on an original idea by Peter Barsocchini, with Kirk DeMicco attached to direct, Lisa Stewart set to produce, Laurence Mark serving as executive-producer, and Quiara Alegría Hudes writing the screenplay from a story by Peter Barsocchini with a release date of December 18, 2020. It was also revealed that Miranda would be writing 11 songs for the film. [1] In January 2018, the film's theatrical release date was moved a month earlier, to November 6, 2020.[2] In June 2019, Sony Pictures Animation head Kristine Belson announced that Rich Moore would join the film as co-producer of the film with Roger Deakins serving as the film's cinematographer.[3] In November 2019, the film's theatrical release date was moved to April 16, 2021.[4] In April 2020, the film's theatrical release date was moved to June 4, 2021 as a result of the COVID-19 pandemic.[5]

Sony Pictures Animation Wiki has a collection of images and media related to Vivo. 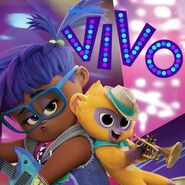 Add a photo to this gallery

Retrieved from "https://sonypicturesanimation.fandom.com/wiki/Vivo?oldid=25444"
Community content is available under CC-BY-SA unless otherwise noted.